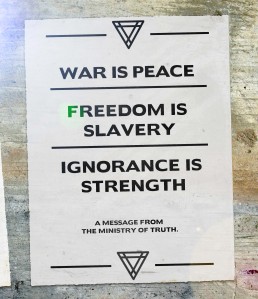 THE LAYERS THAT HIDE REALITY

Growing up requires constantly revising our previous understanding of the world. This process begins as infants pass through various stages of cognitive and emotional development, each stage bringing the child closer to truths about the world. In the beginning, an understanding of object permanence, time, and causation, are gained. Slowly the biological impediments to understanding are being overcome. Then, as we mature, we confront a mysterious social world. There, unlike in the world of childhood books, animals and people aren’t always our friends, school and sports make demands upon us, and social groups accept or ostracize us. The cocoon of childhood slowly vanishes, as the layers of film hiding reality disappear.

As we reach late adolescence becoming educated involves acknowledging the social, historical, biological, and psychological layers that blanket reality. We discover that religion, politics, ethics, and relationships are not as they first appear. Their reality, at least to the extent we have access to them, has been buried beneath layers of falsehoods. For example, we may have been taught that religion and country are good only to find them bastions of hypocrisy and corruption; or we may have believed that some persons were trustworthy friends only to find that they were not. Such experiences bring home the difference between appearance and reality. But why the gap between our youthful idealistic views and the reality of the world? Is it that our truth-detection methods become more sophisticated as we mature thereby allowing us to see things more clearly, or have we been lied to all our young lives about the truth? Surely part of the answer is that we have been lied to, but why?

Some of this mendacity emanates from ignorance. Pseudo-authorities often don’t know what a scientific truth is, what a political party stands for, or what a relatively accurate deconstruction of the social world would be like. As a consequence, they misinform us because they don’t know what they’re talking about. Moreover, the ignorant  who teach us are often themselves taken in by and profess support for … demagogues and charlatans. Unable or unwilling to see the world through a critical lens, our teachers are purposely misled by a cadre of individuals who deceive them, and they in turn deceive us. A circle of ignorance is the result, which often takes centuries for truth to penetrate.  However the ignorant are not completely blameworthy, inasmuch as they cannot decipher the propaganda and persuasion which peddle a constant stream of nonsense.  Nonsense is all around, as are the credulous who are ready to believe it. This ignorance explains many of the untruths communicated to us throughout our lives, but we are especially susceptible when we are young.

But sometimes the deceit—regarding the difference between appearance and reality—takes the form of what Plato called a “noble lie.” The idea is to lie to someone for their own or society’s (supposed) good. Such lies are reminiscent of the saying, variously attributed to a number of people upon hearing the theory of evolution: “My dear, descended from the apes! Let us hope it is not true, but if it is, let us pray that it will not become generally known.” Surely there are lies told by those who believe their lies to be beneficial. These liars are not ignorant of the truth, but want to protect us from it. If belief in gods or country help us, then why undermine those beliefs? But while it may be beneficial for some to not know the truth, to deceive them for this reason is paternalistic. This may be appropriate for children–not to tell them about war, violence, hypocrisy and all the rest–but to lie to adults like this blatantly disregards their autonomy.

But worse than ignorance or noble lies are ignoble lies.  Here the liars know the truth yet conceal it for self-interested reasons. These lies are perpetrated by churches, capitalists, and demagogues who lie about: a changing climate, the effects of tobacco, the benefits of universal health care, their own access to the gods, the truths of science, the injustice of the economy, and so much else. When we realize that individuals repress and distort truth for their own benefit, we have discovered something truly sinister. We have found perhaps the closest thing in the world to what the religious call sin. We have unearthed the truth-suppressors; the enemies of humanity who add layers of film to cover up their insidious ways. Tragically, because of such people, idealists often transform into cynics. After all, why love truth and pursue it, when others are so intent on distorting and covering it up?

THE POINT OF UNCOVERING UGLINESS

But now the situation seems even worse. With the deceptive layers of reality removed, we encounter a world of pain and suffering, of depravity and immorality, of lust and greed, of ignorance and purposeful lying. We have grown up, but in some ways wish we hadn’t. The world is not what our parents or our storybooks promised. And here surely is the origin of of the cliche that ignorance is bliss. Who wants to see the bad side of life? Why become conscious if it reveals the abhorrent? Why not remain pollyannaish? Because ignorance is not bliss; ignorance is unconsciousness. And that’s no way to go through life for consciousness of the repulsive is the prerequisite for betterment. Honestly facing the worst, we a chance of creating the best.

A similar realization must have come to Victor Frankl in the concentration camps. Without any illusions about life given his experiences there, he found a deeper meaning than most, a meaning that guided him for the rest of his life. In the concentration camps–places where indescribable grotesqueness replaced the beauty of life–he did not deny the reality of his situation, nor did he imagine it the precursor to a heavenly afterlife. Instead he transformed himself, and a small part of the world too, by recognizing and confronting the evil that surrounded him.  He surely knew the mismatch between the lies, hypocrisy, and horrors he encountered, and the world he had imagined as a child. But this recognition did not destroy him; instead he was edified.

Thus removing the layers of hypocrisy, corruption, and lying gives us a chance to see things as they really are and improve them. And while this doesn’t tell us specifically what we should do; it does tell us what we shouldn’t do. We shouldn’t lie to ourselves and others about where we came from, what we are, and what the truth is as best we can determine it. Life is hard enough when we must act based upon the truth; but if we must choose based on lies we are truly lost.

OUR MINDS AND HEARTS

Of course none of this implies that we possess truth while others wallow in ignorance. All we profess, and all one can profess given our limitations, is that we should be honest truth-seekers, telling the truth as faithfully as we can. This implies never distorting the truth for personal gain, and proclaiming the truth even when it is not in our best interest to do so.

Such reflection has brought us a long way from youthful innocence. We have discovered that truth is often buried, not because of defects in our truth-seeking methods, but from layers of lying.  When we engage in purposeful lying, truth is a casualty and we are all worse off.  In such a world, truth-lovers are left heart-broken.

But then, just as despair sets in, life goes on. New parents love their children … again; young thinkers seek truth honestly … again; idealistic youth work to relieve suffering … again; and new love transforms into older more mature love … again. The good is all around. Our hearts can be filled.