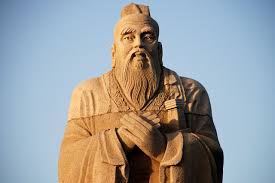 Confucianism: The Way of the Sages

(This post is my summary of a chapter in a book I often used in university classes: Thirteen Theories of Human Nature

Theory of the Universe – (Humanism or secularism as opposed to the supernatural.) Confucius cared about human beings, the human condition—not metaphysics (grand theories of the universe.) Worry about humans, not gods; worry about life, not death, he said. He emphasized that good government would promote social harmony and the general well-being. [Confucius is primarily a political thinker.]

Still Confucius is somewhat metaphysical when he says that morality is embedded in the universe, and that it is within human beings. Its essence is a concern with the general welfare. [Plato, Aristotle, Locke, Hobbes, and the American Presidents Jefferson, FDR, LBJ, Jimmy Carter and others shared this view. Such concern is obviously out of fashion with large parts of American politics today.] Rulers who rule for their own benefit rather than the general welfare, Confucius claimed, will not be supported by the decree of heaven. [While it is nice to think that the heavens favor the just, it is true hard to believe this is true looking around the world. Perhaps the heavens support selfish leaders? Perhaps nice guys finish last?]

Another metaphysical concept in Confucian thinking is the idea that some things are beyond our control—they are the result of destiny. Confucius talked as if destiny was a design of the heaven’s that was beyond human understanding. [It seems that the “decree of Heaven” refers to the natural order of things, but I’m not totally clear what he means by the heavens except to say that it is not a supernatural concept.] Humans can conform to the decree of heaven if they choose—by promoting the general welfare—but our destiny is beyond our understanding and control. [This is reminiscent of the Stoics.] Humans should follow the decree of heaven by being unconcerned with wealth, status, longevity, etc. [Reminiscent perhaps of the “sermon on the mount.”]

The tao is the way of the sages, essentially the way that previous good rulers followed the decree of heaven and promoted the common good, promoted social cohesion. [This concept is transformed by the Taoists and is the most important concept of Taoism. It famously has multiple meanings. Here are more than 175 translations of the first few lines of Tao Te Ching. This should give one pause when they talk of literal translations.]

Theory of Human Nature – Confucius was optimistic about human potential; he wanted people to be sages or wise persons who instantiate the goodness of the heavens within them. This is accomplished by being benevolent. [When you read this beautiful idea it is hard not to contrast it with all the ugliness that surrounds us.] The result of being moral, essentially benevolent, is joy. [Here he echoes Socrates, Plato, and Aristotle who all thought the moral life was the good life, that the just person was the happy person. I don’t know if they are right about this or not, but I hope they are.] Confucius recognized however that most people are not sages, they are miserable. But why?

Confucius was not clear on why so few people become wise, benevolent sages, but he suggested that it might be that we freely choose not to be good. He also thought that our environment plays a large role in shaping us. [Here we see the tension between freedom and determinism, one of the classic philosophical problems.] Thus we need to be molded so as to achieve moral perfection, molded especially by a culture and a social system conducive to our moral development. [Would Confucius think the US is generally conducive to moral development? China? Russia? Pakistan? What societies best encourage their citizens to being benevolent toward their fellows? What societies best provide for the common good, social harmony, and human flourishing?]

Diagnosis – Social discord is “caused by selfishness and ignorance of the past … Consequently human interaction is marred by strife, rulers govern with attention only to personal gain, common people suffer under unjust burdens, and social behavior in general is determined by egoism and greed.” [Sound familiar?] Why is life so bad? Confucius answers it is bad because of: 1) Profit motive; 2) lack of respect for parents; 3) lying; 4) ignorance of the past; 5) little benevolence.

Prescription – Confucius prescribes self-discipline for individuals and rulers in order to cure the ills of society. [I wrote about this briefly in a recent blog entry “The World Desperately Needs Better People”: https://reasonandmeaning.com/2014/08/21/growing-as-people/ ] In other words society will be better when the people who make it up are better. This approach provides answers to the 5 problems listed above.

This goal of attaining self-discipline, self-mastery, or self-perfection takes a lifetime. Benevolence is the outward expression of this internal state and serves as a model to others who want to be sages. For the sages benevolent action naturally flows from them; it is the expression of an internal perfected state. For the self-disciplined person, their behavior is modeled on the sages, with the goal of becoming sages. [Hence the idea that moral perfection is a process of development.] As Confucius says the master and student may appear similar from the outside, but the master does things naturally and spontaneously in a way that the student does not. In the end, moral perfection may be achieved by studying the classics and becoming a sage. If people better themselves, society would improve. [However, I think Confucius would agree with Spinoza]:

“If the way which I have pointed out as leading to this result seems exceedingly hard, it may nevertheless be discovered. Needs must it be hard, since it is so seldom found. How would it be possible, if salvation were ready to our hand, and could without great labour be found, that it should be by almost all men neglected? But all things excellent are as difficult as they are rare.”

Later Developments – But is human nature originally good or evil? Mencius subscribed to the former, while Hsun-tzu to the latter. Mencius tries to refute the view that human nature is neither good nor bad, arguing that humans are inherently good. For Mencius, the heart is a gift from the heavens which inherently contains compassion, shame, courtesy, and a sense of morality which will sprout into benevolence, dutifulness, observation of rites, and wisdom. Nonetheless, Mencius grants that people are also selfish and the good qualities of the human heart must be cultivated. Thus the right conditions must apply. [[I assume this process of development will come to fruition under conditions like parental love, good education, good society, physical safety, health care, food, clothing, shelter, etc.] Mencius even offers an argument that humans are inherently good: if they saw a child in danger they would instinctively try to help the child. [Of course, this argument only works if what Mencius is saying is true.]

Hsun-tzu argued that our interior life is dominated by desires. As these desires are unlimited and resources limited, a natural conflict between people will result. [Eerily reminiscent of Hobbes’ argument that the state of nature is a state of war precisely because the things we want—fame, fortune, etc.—are in short supply.] Our nature thus is generally bad and we must work consciously to be good. [Reminds one of Hepburn’s remark to Bogart in the movie, “The African Queen.” She tells him that our nature is something we should overcome.] Hsun-tzu says that the desire for profit, as well as envy, hatred, and desire, are our natural tendencies which lead to strife, violence, crime, and wantonness. Still Hsu-tzu believed that with proper education, training and ritual everyone could become morally excellent. This takes effort and is aided by a good culture.

Despite their disagreements both Mencius and Hsun-tzu agree that the path of sagehood consists of action based on the examples of previous sages. For Hsun-tzu we are naturally warped boards that need to be straightened; for Mencius we are relatively straight boards that can be warped.

Despite these criticisms, neo-Confucianism may be able to be modified “as a positive resource for thinking about ways to overcome the destructive side of modernization that threatens both human communities and the natural world.”

8 thoughts on “Summary of Confucianism on Human Nature”