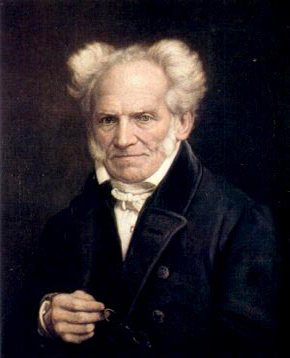 Arthur Schopenhauer (1788 – 1860) was a German philosopher known for his atheism and pessimism—in fact, he is the most prominent pessimist in the entire western philosophical tradition. Schopenhauer’s most influential work, The World As Will and Representation, examines the role of humanity’s main motivation, which Schopenhauer called will. His analysis led him to the conclusion that emotional, physical, and sexual desires cause suffering and can never be fulfilled; consequently, he favored a lifestyle of negating desires, similar to the teachings of Buddhism and Vedanta. Schopenhauer influenced many thinkers including Nietzsche, Wittgenstein, Einstein, and Freud.

In “On the Sufferings of the World” (1851), Schopenhauer boldly claims: “Unless suffering is the direct and immediate object of life, our existence must entirely fail of its aim.”[i] In other words, suffering and misfortune are the general rule in life, not the exception. Contradicting what many philosophers had stated previously, Schopenhauer argued that evil is a real thing, with good being the lack of evil. We can see this by considering that happiness or satisfaction always imply some state of pain or unhappiness being brought to an end; and by the fact that pleasure is not generally as pleasant as we expect, while pain much worse than imagined.

To those who claim that pleasure outweighs pain or that the two balance out, he asks us “to compare the respective feelings of two animals, one of which is engaged in eating the other.”[ii] And he quickly follows with another powerful image: “We are like lambs in the field, disporting themselves under the eye of the butcher, who choose out first one and then another for his prey. So it is that in our good days we are all unconscious of the evil Fate may have in store for us—sickness, poverty, mutilation, loss of sight or reason.”[iii]

Schopenhauer continues by offering multiple ideas and images meant to bring the reality of human suffering to the fore: a) that time marches on and we cannot stop it—it stops only when we are bored; b) that we spend most of life working, worrying, suffering, and yet even if all our wishes were fulfilled, we would then either be bored or desire suicide; c) in youth we have high hopes, but that is because we don’t consider what is really in store for us—life, aging, and death; (Of aging Schopenhauer says: “It is bad today, and it will be worse tomorrow; and so on till the worst of all.”[iv]); d) it would be much better if the earth was lifeless like the moon; life interrupts the “blessed calm” of non-existence; f) if two persons who were friends in youth met in old age, they would feel disappointed in life merely by the sight of each other; they will remember when life promised so much, in youth, and yet delivered so little; g) “If children were brought into the world by an act of pure reason alone, would the human race continue to exist?”[v] Schopenhauer argues that we should not impose the burden of existence on children. Of his pessimism he says:

I shall be told … that my philosophy is comfortless—because I speak the truth; and people preferred to be assured that everything the Lord has made is good. Go to the priests, then, and leave the philosophers in peace … do not ask us to accommodate our doctrines to the lessons you have been taught. That is what those rascals of sham philosophers will do for you. Ask them for any doctrine you please, and you will get it.[vi]

Schopenhauer also argues that non-human animals are happier than human beings since happiness is basically freedom from pain. The essence of this argument is that the bottom line for both human and non-human animals is pleasure and pain which has as its basis the desire for food, shelter, sex, and the like. We are more sensitive to both pleasure and pain than non-human animals, but we also have much greater passion and emotion regarding their desires. This passion results from our ability to reflect upon the past and future, leaving us susceptible to both ecstasy and despair. We try to increase our happiness with various forms of luxury as well as desiring honor, other persons praise, and intellectual pleasures.

But all of these pleasures are accompanied by the constant increased desire and the threat of boredom, a pain unknown to the brutes. Thought, in particular, creates a vast amount of passion, but in the end, all of our struggles are for the same things that non-human animals try to attain—pleasure and pain. But humans, unlike animals, are haunted by the constant specter of death, a realization which ultimately tips the scale in favor of being a brute. Furthermore, non-human animals are more content with mere existence, with the present moment, than are we who constantly anticipate future joys and sorrows.

And yet animals suffer. What is the point of all their suffering? You cannot claim that it builds their souls or results from their free will. The only justified conclusion is “that the will to live, which underlies the whole world of phenomena, must, in their case satisfy its cravings by feeding upon itself.”[vii] Schopenhauer argues that this state of affairs—pointless evil—is consistent with the Hindu notion that Brahma created the world by a mistake, or with the Buddhist idea that the world resulted from a disturbance of the calm of Nirvana, or even with the Greek notion of the world and gods resulting from fate.

But the Christian idea that a god was happy with the creation of all this misery is unacceptable. Two things make it impossible for any rational person to believe the world was created by an omniscient, omnipotent, and omnibenevolent being: 1) the pervasiveness of evil; and 2) imperfection of human beings. Evil is an indictment of such a creator, but since there is no creator it is really an indictment of reality and of ourselves.

Schopenhauer continues: “If you want a safe compass to guide you through life, and to banish all doubt as to the right way of looking at it, you cannot do better than accustom yourself to regard this world as a penitentiary, a sort of penal colony.”[viii] He claims this is the view of Origen, Empedocles, Pythagoras, Cicero, as well as Brahmanism and Buddhism. Human life is so full of misery that if there are invisible spirits they must have become human to atone for their crimes.

If you accustom yourself to this view of life you will regulate your expectations accordingly, and cease to look upon all its disagreeable incidents … as anything unusual or irregular; nay, you will find everything is as it should be, in a world where each of us pays the penalty of existence in [their] own particular way.[ix]

Ironically there is a benefit to this view of life; we no longer need to look upon the foibles of our fellow men with surprise or indignation. Instead, we ought to realize that these are our faults too, the faults of all humanity and reality. This should lead to pity for our fellow sufferers in life. Thinking of the world as a place of suffering where we all suffer together reminds us of “the tolerance, patience, regard, and love of neighbor, of which everyone stands in need, and which, therefore, every [person] owes to [their] fellows.”[x]

Summary – Schopenhauer thinks life, both individually and as a whole, is meaningless, primarily because of the fact of suffering. It would be better if there was nothing. Given this situation, the best we can do is to extend mercy to our fellow sufferers.

I think Schopenhauer’s philosophical insights are generally underrated by philosophers, which is in large part due to their supposed pessimism. They should be considered as a clarion call to look at life more realistically and improve it. Seen thus, his philosophy is not so pessimistic after all.

Schopenhauer is correct that suffering is real; philosophers who think it merely a privation of good are deceiving themselves. If we bring pain or evil to an end we experience happiness—surely this suggests that suffering is real. There is also something intuitive about the idea that the pleasure we look forward to often disappoints, whereas pain is often unendurable. How often have you looked forward to something whose reality disappointed? In Schopenhauer’s graphic image the pleasure of eating does not compare with the horror of being eaten.

However, this comparison is unfair, since we eat many times and can only be eaten once—naturally the pleasure of a single time meal cannot compare favorably to the terror of being eaten. A better comparison would be a lifetime of eating versus one moment of being eaten. We can certainly imagine that one would opt for multiple culinary pleasures in exchange for being quickly eaten at some later time.

Schopenhauer’s idea that we are like lambs waiting to be slaughtered is an even more powerful image. We are sympathetic to the lambs, cows, and pigs as they await their fates, but ours is not much different. We typically wait longer for our death, and the field in which we are fenced may be larger and more interesting, but our end will be similar, even worse if we linger and suffer at the end of life. Just like the animals awaiting slaughter we too cannot escape.

Surely there is some sense in which our impending death steals from the joy of life. We are all terminal, all in differing stages of the disease of aging which afflicts us. And this basic idea holds together his many images and ideas. We cannot stop time; we worry; we slowly realize many of our dreams will never be realized; and we recognize that each day we will grow older and more feeble, leading to an inevitable outcome. It may have been better if we had never existed at all.

It is this consciousness of suffering and death which makes human life worse than animal life, according to Schopenhauer. Yet this argument is not quite convincing, inasmuch as that same consciousness provides benefits for us as compared to non-human animals. So Schopenhauer’s argument is not completely convincing. Still, although he has not established that the life of the brute is better than that of the human, he has shown something quite powerful—it is not obvious that human-animal life is better than non-human animal life. This is no small achievement and ought to be taken seriously. If this argument is correct, then humans should change their own nature if possible—by using their emerging technologies.

Schopenhauer is also correct that non-human animal suffering is hard to reconcile with Christian theism, as generations of Christian apologists have discovered. Moreover, his Stoical response to the evils of the world is commendable, as is his call for tolerance for the foibles of our fellow travelers. In the end, Schopenhauer is right: the sufferings of the world count strongly against its meaningfulness, even if not definitively so.

13 thoughts on “Summary of Arthur Schopenhauer’s, “On the Sufferings of the World””