If death is inevitable, then all we can do is die and hope for the best. But perhaps we don’t have to die. Many respectable scientists now believe that humans can overcome death and achieve immortality through the use of future technologies. But how will we do this?

The first way we might achieve physical immortality is by conquering our biological limitations—we age, become diseased, and suffer trauma. Aging research, while woefully underfunded, has yielded positive results. Average life expectancies have tripled since ancient times, increased by more than fifty percent in the industrial world in the last hundred years, and most scientists think we will continue to extend our life-spans. We know that we can further increase our lifespan by restricting calories, and we increasingly understand the role that telomeres play in the aging process. We also know that certain jellyfish and bacteria are essentially immortal, and the bristlecone pine may be as well. There is no thermodynamic necessity for senescence—aging is presumed to be a byproduct of evolution —although why mortality should be selected remains a mystery. There are reputable scientists who believe we can conquer aging altogether—in the next few decades with sufficient investment—most notably the Cambridge researcher Aubrey de Grey. 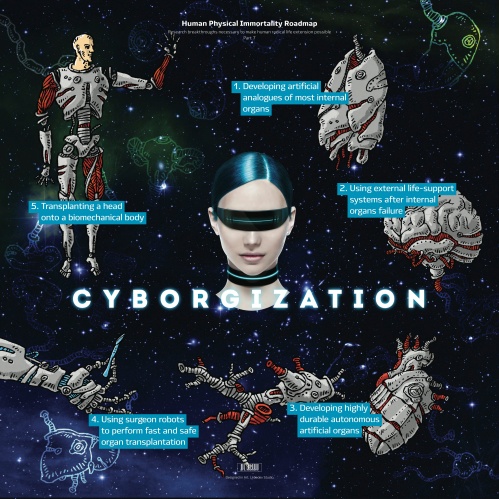 If we do unlock the secrets of aging, we will simultaneously defeat many other diseases as well, since so many of them are symptoms of aging. Many researchers now consider aging itself to be a disease that progresses as you age. There are a number of strategies that could render disease mostly inconsequential. Nanotechnology may give us nanobot cell-repair machines and robotic blood cells; biotechnology may supply replacement tissues and organs; genetics may offer genetic medicine and engineering; and full-fledged genetic engineering could make us impervious to disease.

Trauma is a more intransigent problem from the biological perspective, although it too could be defeated through some combination of cloning, regenerative medicine, and genetic engineering. We can even imagine that your physicality could be recreated from a bit of your DNA, and other technologies could then fast forward your regenerated body to the age of your traumatic death, where a backup file with all your experiences and memories would be implanted in your brain. Even the dead may be resuscitated if they have undergone the process of cryonics—preserving organisms at very low temperatures in glass-like states. Ideally these clinically dead would be brought back to life when future technology was sufficiently advanced. This may now be science fiction, but if nanotechnology fulfills its promise there is a reasonably good chance that cryonics will be successful.

In addition to biological strategies for eliminating death, there are a number of technological scenarios for immortality that utilize advanced brain scanning techniques, artificial intelligence, and robotics. The most prominent scenarios have been advanced by the renowned futurist Ray Kurzweil and the roboticist Hans Moravec. Both have argued that the exponential growth of computing power in combination with advances in other technologies will make it possible to upload the contents of one’s consciousness into a virtual reality. This could be accomplished by cybernetics, whereby hardware would be gradually installed in the brain until the entire brain was running on that hardware, or via scanning the brain and simulating or transferring its contents to a computer with sufficient artificial intelligence. Either way, we would no longer be living in a physical world.

In fact, we may already be living in a computer simulation. The Oxford philosopher and futurist Nick Bostrom has argued that advanced civilizations may have created computer simulations containing individuals with artificial intelligence and, if they have, we might unknowingly be in such a simulation. Bostrom concludes that one of the following must be the case: civilizations never have the technology to run simulations; they have the technology but decided not to use it, or we almost certainly live in a simulation.

If one doesn’t like the idea of being immortal in a virtual reality—or one doesn’t like the idea that they may already be in one now—one could upload one’s brain to a genetically engineered body if they liked the feel of flesh, or to a robotic body if they liked the feel of silicon or whatever materials comprised the robotic body. MIT’s Rodney Brooks envisions the merger of human flesh and machines, whereby humans slowly incorporate technology into their bodies, thus becoming more machine-like and indestructible. So a cyborg future may await us.

The rationale underlying most of these speculative scenarios has to do with adopting an evolutionary perspective. Once one embraces that perspective, it is not difficult to imagine that our descendants will resemble us about as much as we do the amino acids from which we sprang. Our knowledge is growing exponentially and, given eons of time for future innovation, it easy to envisage that humans will defeat death and evolve in unimaginable ways. For the skeptics, remember that our evolution is no longer moved by the painstakingly slow process of Darwinian evolution—where bodies exchange information through genes—but by cultural evolution—where brains exchange information through memes. The most prominent feature of cultural evolution is the exponentially increasing pace of technological evolution—an evolution that may soon culminate in a technological singularity.

The technological singularity, an idea first proposed by the mathematician Vernor Vinge, refers to the hypothetical future emergence of greater than human intelligence. Since the capabilities of such intelligences are difficult for our minds to comprehend, the singularity is seen as an event horizon beyond which the future becomes nearly impossible to understand or predict. Nevertheless, we may surmise that this intelligence explosion will lead to increasingly powerful minds for which the problem of death will be solvable. Science may well vanquish death—quite possibly in the lifetime of some of my readers.

But why conquer death? Why is death bad? It is bad because it ends something which at its best is beautiful; bad because it puts an end to all our projects; bad because all the knowledge and wisdom of a person is lost at death; bad because of the harm it does to the living; bad because it causes people to be unconcerned about the future beyond their short lifespan; bad because it renders fully meaningful lives impossible; and bad because we know that if we had the choice, and if our lives were going well, we would choose to live on. That death is generally bad—especially for the physically, morally, and intellectually vigorous—is nearly self-evident.

Yes, there are indeed fates worse than death and in some circumstances, death may be welcomed. Nevertheless for most of us most of the time, death is one of the worst fates that can befall us. That is why we think that suicide and murder and starvation are tragic. That is why we cry at the funerals of those we love.

Our lives are not our own if they can be taken from us without our consent. We are not truly free unless death is optional.