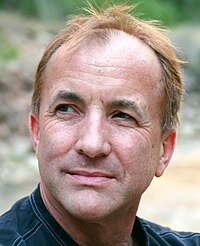 Michael Shermer (1954 – ) is an American science writer, historian of science, founder of The Skeptics Society, and Editor in Chief of its magazine Skeptic, which is largely devoted to investigating pseudoscientific and supernatural claims. He is also the author of numerous well-received popular books. He received his PhD in the history of science in 1991 from the Claremont Graduate University.

In his commencement speech at Whittier College in May of 2008 titled, “The Meaning of Life, The Universe, and Everything,” Shermer makes his case for the relationship between evolution and meaning. He asserts that while the question of the existence of an afterlife is an open one, we should live as if this life is the only one, treating others and each moment as the most important thing. In this way our lives become meaningful by valuing things in the here and now, as opposed to treating this life as a prelude to another one. The values and purposes and meanings we create are provisional of course, since we have no access to ultimate truth. In this way they are analogous to the provisional truths of science—facts confirmed to such a degree we give them our provisional assent. The self-correcting nature of science determines provisional scientific truths, while life itself shows the way to provisional purpose.

The most basic purpose of life is survival and reproduction, and we are the product of those billions of years of evolution. We might conclude that there was a cosmic destiny or divine providence that led to us, but in fact the existence of life was contingent on a billion circumstances. If an asteroid like the one that destroyed the dinosaurs had hit the earth a million years ago, if a few Homo sapiens had not migrated from Africa a hundred thousand years ago, if Neanderthals had killed our ancestors thirty thousand years ago, if any of these or countless other perturbations had occurred, we would have vanished. We are contingent.

But from our humble beginnings, a sense of purpose and the desire to achieve goals has evolved. We love, work, play, become involved, and transcend, finding transcendent meaning in the world revealed by science and the awe it inspires. Shermer experiences awe by looking at the Andromeda galaxy through his backyard telescope, by contemplating that the light of that galaxy took three million years to reach his retina, and by the fact that this galaxy was unknown until recently. The vastness of deep space and time are themselves more than enough to generate awe, and what generates awe is a source of meaning. Evolution has produced creatures with meaning built into them, and with the ability to experience it, if they choose to do so.

Summary – Evolution has built meaning and purpose into us.

1 thought on “Michael Shermer, “The Meaning of Life, The Universe, and Everything””