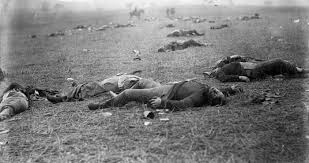 “Is America on the Verge of Civil War?

While the idea may sound absurd, it happened just a few generations ago. The industrial north and the slave-holding, agrarian south couldn’t agree on, among other things, the extension of slavery into new states, as both sides didn’t want the other to gain a congressional voting advantage. A series of compromises over many years maintained the delicate balance, but gradually the two sides became more partisan, the rhetoric more divisive, and civil discourse eventually disappeared. Soon violence would be used to adjudicate their disputes, with the south firing the first shot.

Within four years 700,000 Americans were dead, thousands more injured, homeless, widowed or orphaned. If that proportion of Americans were killed today, about 8 million Americans would die. The south thought that slavery and the lifestyle it provided were worth dying and killing for … and die and kill they did.

The parallels between the period that led up to the Civil War in America and the situation today are striking. Today the basic functions of government—filling judicial vacancies including those on the Supreme Court, passing budgets, maintaining infrastructure, paying our bills—are stymied by disagreements over abortion, marriage, contraception, gun control, diplomacy, climate change, immigration, taxes, race relations and more. And these disagreements, like those preceding the American civil war, take on a regional flavor. The citizens of coastal and northeastern states are generally more educated, liberal and progressive, those of midwestern and southern states typically less educated, and more conservative and reactionary.

Ideally, these moral and political disagreements would be resolved through rational discourse. Members of the legislative and executive branches, informed by experts and the best available scientific evidence, would carefully and conscientiously consider the truth about issues. Subsequently, they would exchange ideas with their colleagues and then follow the most prudent course that served both the national and international interest. But in reality representatives who want to be re-elected act in their own self-interest—generally accomplished by appeasing an ignorant constituency or a monied special interest.

In other words, most representatives aren’t interested in the national or international interest; rather they are self-interested. If opposition to gun control, immigration reform, environmental protection aids their re-election, they will oppose such measures no matter how collectively good they might be. And if they don’t get their way, they won’t compromise. Instead, they will not approve judges or budgets or threaten to shut down government or default on the nation’s debt obligations to get their way. They will actually threaten to undermine the world economy because, for example, their constituency doesn’t want contraceptives distributed or people to have access to health-care!

Representatives should know better. After all, given their place in the economic order, it’s counterproductive to risk a world economic collapse over contraceptives or their citizens health-care. But to be re-elected they must pretend to care about keeping contraceptives from sexually active teenagers, or health-care from poor people since many of their votes come from people who hold medieval views about sex or hate poor people. It’s also senseless for the elite to undermine the judiciary, as the wealthy benefit most from the rule of law and social stability. But if not approving judges is what some special interest wants, then, by all means, reduce the efficiency of the courts in order to be re-elected.

In fact, why not demonize government altogether if that helps get you get re-elected? Tell your constituency you hate government, just don’t mention that government includes police, firefighters, national guard, military, FBI, CIA, CDC or the very government that you are working for! Tell people to trust private corporations, for surely Monsanto and Exxon Mobil have your interests at heart more so than FDR did when he created social security or LBJ did when he lobbied for Medicare and Medicaid. Now I understand that the rich who fund campaigns don’t want to pay taxes or have their businesses regulated, but by demonizing government as a means to this end they weaken the foundation of their own wealth and power. They undermine government and the rule of law at their peril.

The combination of a corrupt political/economic system, demonization of government, rampant economic and social equality and an uninformed or misinformed citizenry is a toxic brew. It is the root cause, for example, of the current Donald Trump phenomena in which the dissatisfied masses support a uniquely unqualified individual for the office of the American Presidency. Trump is obviously unqualified for the office of the presidency in every conceivable way—from his personality and moral character to his psychological instability, to his lack of experience and knowledge of virtually anything relevant to the job. Trump is a poster boy of the Dunning-Kruger effect, a cognitive bias in which the ignorant assume they are knowledgeable about things of which they are ignorant. Many of his supporters no doubt suffer from a similar malady.

And while the American Psychiatric Association prohibits its members from offering a psychiatric diagnosis of a public official without their having conducted an exam on that person, I’m not a member so I’ll take my shot. (I have studied abnormal psychology in some detail.) I’d say a cursory glance at Mr. Trump reveals that he suffers severely from a number of psychological maladies including bipolar disorder, narcissistic personality disorder, and quite probably borderline personality disorder. He also suffers psychologically from the lack of sleep he brags about. Among the big 5 personality traits, he would be rated very high on neuroticism and low on emotional stability. His mafia connections run deep and he most likely laundered money through his Russian connections.

Putting such an unstable individual at the helm of the nuclear arsenal is just one unintended consequence (and a particularly scary one) of a broken political system, especially today’s dysfunctional, obstructionist Republican party. The Republican party, especially its Tea Party wing, is, in fact, a Confederate party, a white, racist party whose power is most prominent in the American south. As the basic functions of democratic government are eroding, the ignorant look for a strongman to save them. Needless to say, this does not bode well for the republic or for international peace and prosperity.

Another way of looking at the American situation reveals that the society is caught in a paradox that game theorists call an n-person prisoner’s dilemma. The essence of this paradox is that all of us would do better if we all cooperated—by having universal health-care, acting on climate change, minimizing environmental pollution, reducing or eliminating nuclear arsenals, abandoning the use of antibiotics for livestock, fixing the infrastructure, etc.—but groups who profit producing weapons, refining oil, polluting the environment, selling health insurance or not paying taxes do better if they never cooperate, at least in the short-term. Thus we live in a state of political warfare rather than a more cooperative society like Norway, Denmark, Sweden, Switzerland or the Netherlands.

The key to escaping this prisoner’s dilemma is to penalize those who don’t abide by the social contract, those who don’t cooperate with the rest of us. This works pretty well for petty criminals who steal $100 from the quick shop, but it doesn’t work well for forcing cooperative behavior from bankers, financiers, CEOs and the corrupt politicians who do their bidding. When billions of dollars are stolen or billions of dollars of taxes go unpaid, there are no repercussions. No one is guarding the guardians—and your AR-15 won’t save you. When weapons manufacturers, oil companies, or the meat or insurance industries oppose measures that serve the common good, they win and the common good loses.

There is little hope that much can be done about all this, since justice would demand that the many prominent citizens, politicians, financiers, and others serve jail time, and a majority of those in prison would be released and given a basic income as recompense for the injustice they have probably been subject to since birth. The little thieves go to jail, while the big thieves get bonuses. The wealthy and powerful want to undermine government’s ability to regulate, that’s why they rail against regulation. What they really don’t want is for government, the collective power of the people, to regulate their wealth and power. They want to be able to pollute the environment, profit from selling assault rifles or deny people health care.

So what can be done? Perhaps the US government can become less corrupt like those of the Scandinavian countries, but I wouldn’t bet on it. A more radical solution, but one I have suggested many times on this blog, is for future technologies to rewire our brains so that humans will become more cooperative and intelligent. In addition, we would also need the moral courage to utilize such technology. This is, I believe, our best hope.

But I’d actually bet that humans will destroy themselves, except that if I won that bet I wouldn’t be around to collect. So instead I’ll keep hoping that our descendants will find ways to augment their moral and intellectual faculties. For either, we evolve or we will die.

1 thought on “Is America on the Verge of Civil War?”