I had the pleasure of pre-publication access to David Wood’s recent book Transcending Politics: A Technoprogressive Roadmap to a Comprehensively Better Future. Wood is chair of London Futurists and on the Humanity+ board of directors. Here is my blurb on the book’s back cover:

“Politics plays a significant role in the possibility of our future survival and flourishing. But politics today is largely broken. In response, Wood urges us to embrace transhumanism—to use technology to overcome the limitations of brains formed in the Pleistocene. For without greater intelligence, emotional well-being, and better political institutions, we are doomed. This carefully and conscientiously crafted work defends this thesis with vigor, and it is a welcome relief from the ubiquitous nonsense that passes for political dialogue today. Let us hope that it informs that dialogue and fuels action.” John Messerly, Author of ‘Reason and Meaning’, one of the ‘Top 100 Philosophy Blogs on the Planet’

Let’s begin with the book’s first sentence, “There’s no escape: the journey to a healthier society inevitably involves politics.” How then do we solve our political crisis? Wood answers:

In response to our current conceptual crisis, I offer transhumanism. Just as I believe that the journey to a healthier society inevitably involves politics, I also believe that the journey inevitably involves transhumanism … A better politics awaits us, beckoning us forward. It’s up to us – all of us – whether we recognise that call and take the required actions. Key to these actions will be to harness technology more wisely and more profoundly than before…

Woods is a techno-progressive. Such thinkers argue that technological developments can be empowering and emancipatory when they are regulated by legitimate democratic and accountable authorities to ensure that their costs, risks, and benefits, are all fairly shared by the stakeholders to those developments.[1] Here is how Wikipedia puts it:

Techno-progressivism maintains that accounts of progress should focus on scientific and technical dimensions, as well as ethical and social ones. For most techno-progressive perspectives the growth of scientific knowledge or the accumulation of technological powers will not represent the achievement of proper progress unless and until it is accompanied by a just distribution of the costs, risks, and benefits of these new knowledges and capacities. At the same time, for most techno-progressive the achievement of better democracy, greater fairness, less violence, and a wider culture of human rights are all desirable, but inadequate in themselves to confront the quandaries of contemporary technological societies unless and until they are accompanied by progress in science and technology to support and implement these values.[2]

To better understand the connection between politics and transhumanism consider what Wood calls the 4 “supers” of techno-progressive transhumanism:

(I would add “super morality,” although it is somewhat covered under super democracy and super well-being. Super morality refers to overcoming human tendencies towards selfishness, violence, conflict, greed, and the lack of sympathy and empathy.)

Let’s conclude by considering the opening lines of Aristotle’s Politics,

Every state is a community of some kind, and every community is established with a view to some good; for mankind always act in order to obtain that which they think good. But, if all communities aim at some good, the state or political community, which is the highest of all, and which embraces all the rest, aims at good in a greater degree than any other, and at the highest good.

Aristotle is arguing for the supreme importance of politics. Updating this insight, Woods agrees with Aristotle that we can’t live good lives without good government, but adds that we can’t have good government without transforming human beings. I agree. We’ll never change politics unless we transform ourselves and we’ll do that only by the wise use of our scientific and technological power.

Wood has recently produced a sketch of how to engineer greater human resilience. It doesn’t align perfectly with his 4 “supers” but there are overlaps. Note his emphasis on overcoming biological, intellectual, psychological, social and moral limitations. 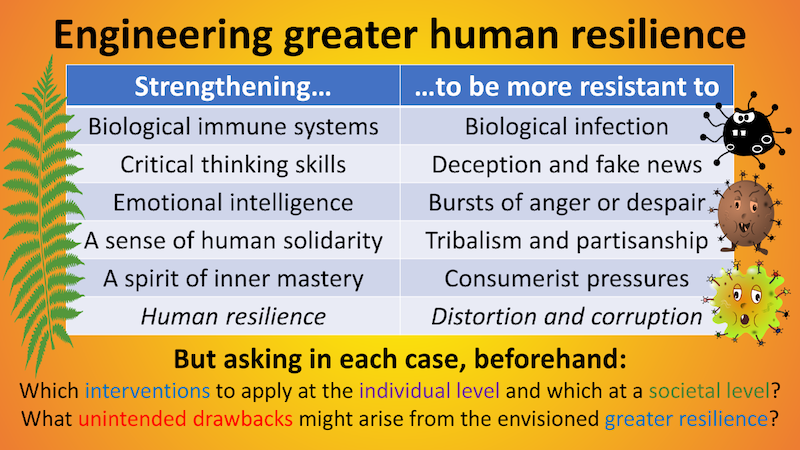